The countryside around Battambang

Posted on March 2, 2015 by theschneiduks

Robert and I are enjoying Battambang so much that we extended our stay by 2 days.  The people are very friendly, and we are liking the food quite a bit.  We checked into a different hotel and spent most of our time lounging by the pool, venturing out at night to eat at the night markets.  Today, however, we hired a tuk tuk driver and took a tour of the countryside surrounding Battambang.  Our driver was fascinating — he had been a child during the Khmer Rouge regime and lived through it, along with his family.  As an adult, he had been a monk, a teacher, and now a tuk tuk driver.  Unbelievably, he told us that as a public school teacher he made $30/month and only survived by taking on private teaching lessons — he makes more driving a tuk tuk for two days than he did after teaching for an entire month (assuming he gets full day fares).

He first showed us an old temple near Battambang that had been used as a prison during the Khmer Rouge regime.

Next, we got to taste coconut rice.  They take bamboo, fill it full of a concoction made of sticky rice, coconut milk and black beans.  The whole thing is cooked over a fire.  You then peel the bamboo back and eat.  Yum!

Then, it was on to a fish market where they make a fish paste that goes in most of the food here.  I’m going to try to forget that sight and smell. 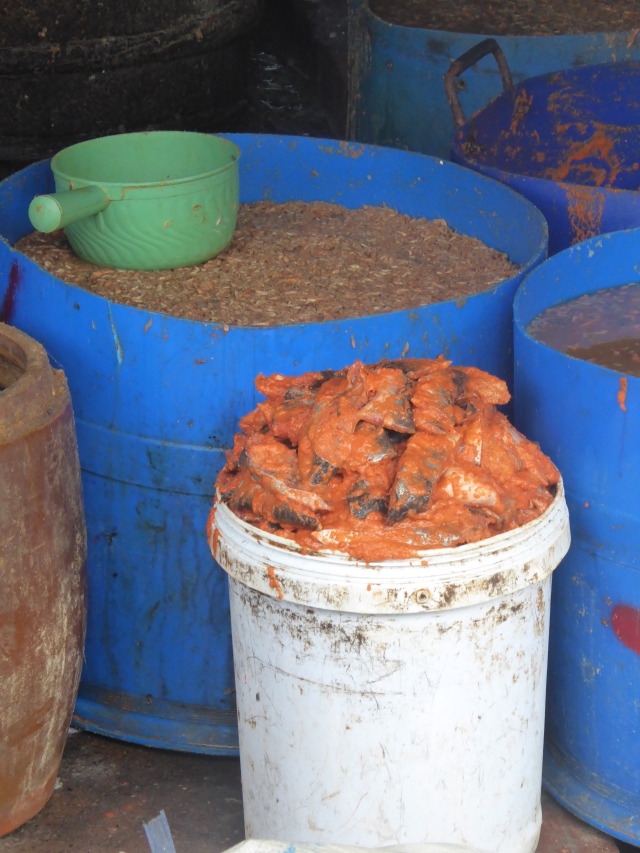 Next, we went to Ek Phnom.

Robert and Lisa at Ek Phnom

Where Lisa shrieked when a cute little lizard came out of the leaves at her feet.

And we saw rice drying in front of a temple.

Rice drying in front of a temple

And ate spring rolls made with the fresh rice paper.  So much better than anything we have had in the US.

And, last but not least, we saw a crocodile farm.  The crocs are apparently used for both food and their hide.

Adult gators basking in the sun

And held a baby crocodile. 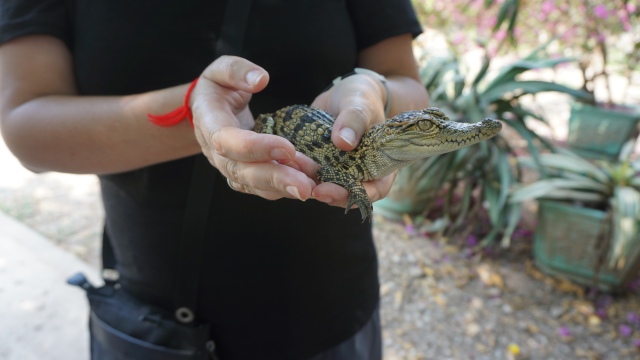 Tomorrow, we head back to Phnom Penh to visit the Killing Fields and get our Vietnam visa.

Lisa has a degree in biology and another in law and has spent the last 20 years working as a patent litigator. She is a voracious reader of young adult dystopian fiction and watches far too much bad tv. She loves pretty much anything to do with zombies, and doesn’t think there is anything weird about setting an alarm at 6 am on a weekend to stumble to a pub to watch her beloved Chelsea boys. Robert has had many professions, including a chef, a salesman, an IT guy and most recently, a stay at home dog dad. He speaks Italian and hopes to learn Spanish on this trip. He loves nothing more than a day spent sailing, hopes to do more scuba diving, and rues the day he introduced Lisa to football (i.e., soccer).
View all posts by theschneiduks →
This entry was posted in Cambodia and tagged battambang. Bookmark the permalink.