Rats, bats and bones in Battambang

Posted on February 26, 2015 by theschneiduks

After a few days in Phnom Penh, we decided to head up to Battambang.  Battambang is the second largest city in Cambodia, but it is much quieter than Phnom Penh and not nearly as touristy.

At the top of the mountain

To get here, we took a mini-bus.  Picture a van with 15 seats — two next to the driver, three rows of three, and a row of four in the back.  There is no place to store luggage, so it goes under seats, next to the sliding door and basically anywhere the driver can find room.  (It could be worse, as the minibuses that cater solely to locals also put people on top of the van — I have no idea how they hold on — or whether they pay a discounted rate for a seat on the roof).  Now, pull that van out onto a road filled with semis, large buses, trucks, mini-buses, cars, motorcycles, tuk-tuks (both the small kind that hold about 4 people and the large kind that hold probably 30 or so), weird wagon-like things being pulled along by what appears to be a tractor engine, the occasional cow-drawn wagon, the occasional horse-drawn wagon, a few cows that have escaped and are now wandering aimlessly down the road, dogs, chickens and people.  Have the picture?  OK, now picture a road that is barely paved and torn up in many places.  Now, picture the driver who apparently gets paid by the trip and not by the hour trying to go as fast as he absolutely can.  Want to pass?  Don’t worry about whether it is a passing zone or not or whether you are going around a corner or up a hill.  Just ensure nothing larger than the minibus is in sight and coming your way and, if not, floor it and go, all the while honking the horn.  After 5 hours (including the obligatory rest stop along the way), we made it to our destination, only slightly worse for wear. 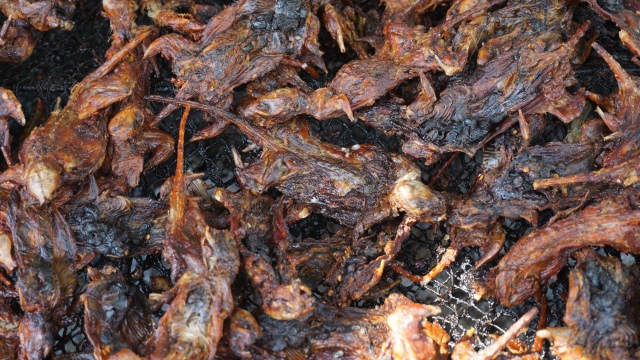 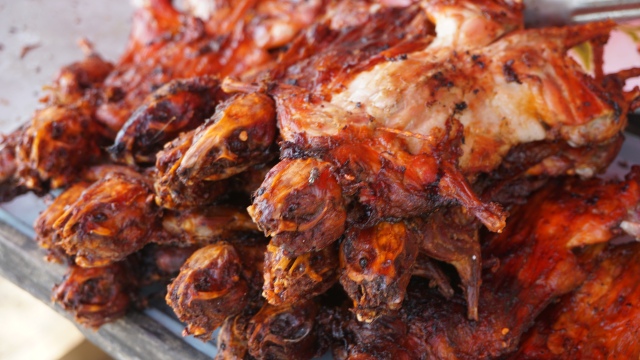 After recovering from that adventure, we hired a tuk-tuk and guide to take us to the killing caves.  Before we got there, we had to stop for a bit of a detour.  Robert (who should have known better) asked the guide if the grilled meat on the side of the road was rat.  Sure enough, the next thing we knew, the tuk-tuk was pulling over by a BBQ joint and we were partaking of grilled rat.  A large rat goes for (at least to a tourist) $1.25.  We were told (and I’m choosing to believe it because the alternative is unthinkable) that the rats used for eating are rats that live in the rice fields and eat rice, vegetables and roots, not common city rats.  I even nibbled a bit of rat leg — it had a nice grilled flavor and tasted likely a gamey chicken.  Not too bad, but I would have to be pretty hungry to eat one again.  (And, no, we didn’t finish the rat).

Next it was off to a temple and the killing caves.  Now, I knew that part of the trip involved a bit of a walk.  What I didn’t know was that we basically had to walk up a mountain (a small mountain, but a mountain none the less) via a very steep road.  In 96 degree weather.  In the sun.  While motorbikes zipped by us.  But up we went.  About half way up, our guide showed us a Buddhist temple that the Khmer Rouge used as a prison. Nearby are three caves where the Khmer Rouge killed local people once they were done interrogating them at the prison:  one for men, one for women, and one for children.  The biggest cave was used for the men — apparently they would be hit in the head or neck with a wooden board and fall into the cave.  The hit didn’t necessarily kill them; the fall killed many.  A few survived the fall, but died because they could not get out of the cave.  At least one person did manage to get out of the cave and tell others of the atrocities that took place in these caves.  The women were killed in a slightly smaller cave.  If they were pregnant, the baby was carved out of them before they were killed.  Babies were tossed into a smaller cave and left to die — apparently when the Khmer Rouge killed one family member, they killed all of them, as they didn’t want anyone growing up and seeking revenge.  Some of the bones have been collected and put on display and people now come to the caves to pray.  Unbelievable that this happened in our lifetimes. 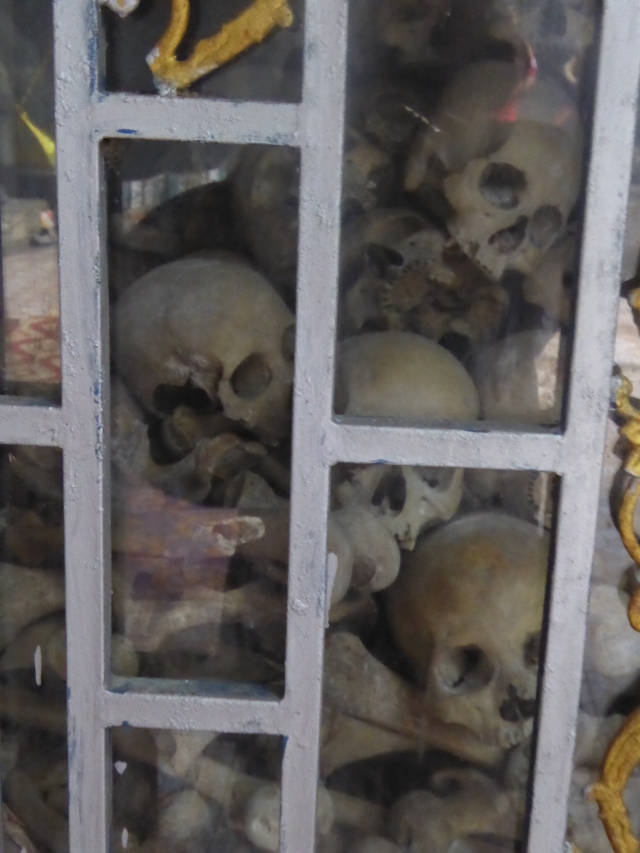 Skulls at the killing cave

After a short respite from the climb, it was time to climb up the rest of the mountain.  Once again, my head was down, I was plodding along, and sweat was dripping into my eyes.  Trust me, I was wondering if I could flag one of those motorbikes down and pay him to take me to the top.  But I kept going because there was a reward at the top — monkeys!  I don’t think our guide believed us when we told him that there are no wild monkeys in the US.  One of the monkeys (see photo) was huge — we thought it was a pregnant monkey but our guide said no, it was just an old man monkey. 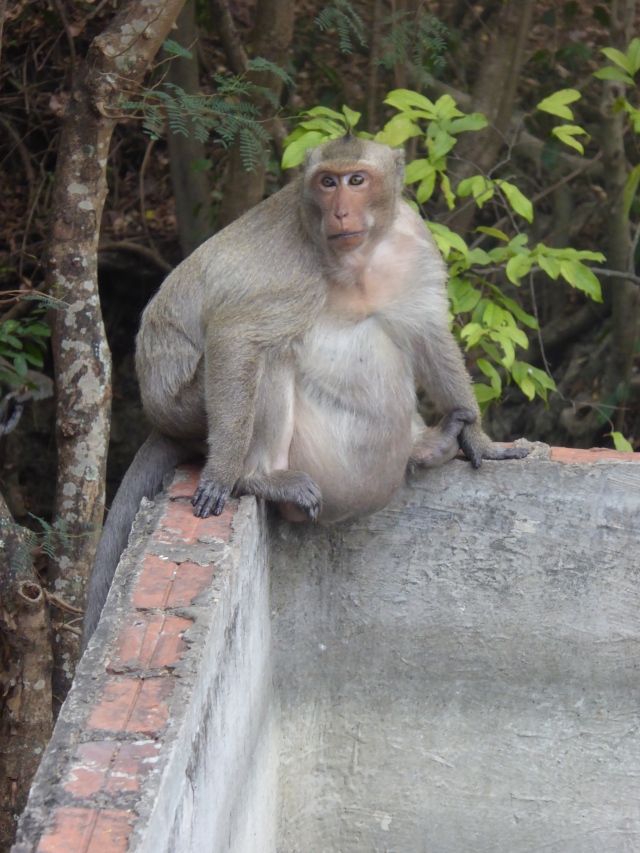 Then it was time to go down the mountain.  But, no, we didn’t get to walk up the same path.  Going down we used steps.  Steps with no handrail in many places and steps that varied step-to-step in how wide and tall they were.  My legs were shaking by the time we got down.  But once again, a reward was waiting.  We walked over to the bat cave.  Each night, millions of bats come flying out of the bat cave and fly to Tonle Sap lake in search of dinner.  We got there in time to see the bats circling around the cave entrance and then fly out — there are so many bats I’m pretty sure they were exiting the cave for about 30 minutes or so (we left before they were finished).

Bats flying out of their cave

After resting up from that adventure, we took a cooking class today.  It started with a trip to the market.  The market here is smaller than some we have seen, but still quite interesting.  All the obligatory fruits and vegetables, but also fish, frogs, snakes and eels.

We didn’t get to go to the meat portion of the market, because apparently too many of the Westerners who signed up for the cooking class were grossed out by it.  Silly — especially given that the meat at the restaurants comes from this same market.  Our guide explained to us 99% of Cambodian households do not have a refrigerator so they shop at the market every day, and the sellers at the market have devised ways to pickle or dry any fresh food that doesn’t sell.  Crazy, huh?  Then it was back to the restaurant to cook.  We made fish amok (which required 15 minutes of pounding out a curry paste — I let Robert do that), beef loc lac (basically, a stir fried beef in a pepper sauce served with a fried egg and rice), fried spring rolls, and a banana/tapioca/coconut milk concoction for dessert.  I even took a turn cooking believe it or not.  Robert can’t wait to try some of the recipes on his own. 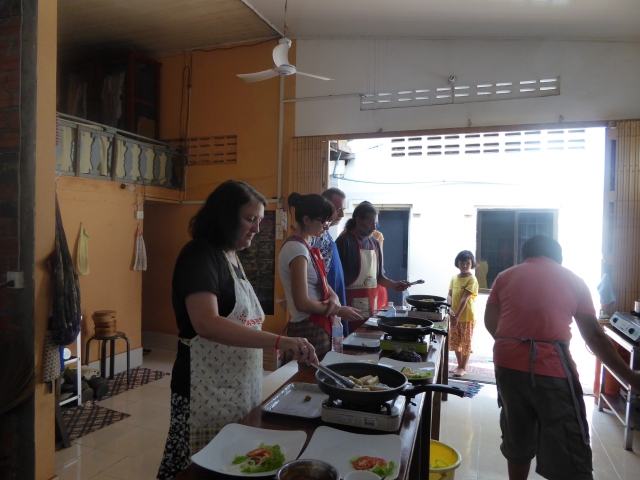 Lisa has a degree in biology and another in law and has spent the last 20 years working as a patent litigator. She is a voracious reader of young adult dystopian fiction and watches far too much bad tv. She loves pretty much anything to do with zombies, and doesn’t think there is anything weird about setting an alarm at 6 am on a weekend to stumble to a pub to watch her beloved Chelsea boys. Robert has had many professions, including a chef, a salesman, an IT guy and most recently, a stay at home dog dad. He speaks Italian and hopes to learn Spanish on this trip. He loves nothing more than a day spent sailing, hopes to do more scuba diving, and rues the day he introduced Lisa to football (i.e., soccer).
View all posts by theschneiduks →
This entry was posted in Cambodia and tagged battambang. Bookmark the permalink.

1 Response to Rats, bats and bones in Battambang