A few days in Yangon

Posted on February 18, 2015 by theschneiduks

Given that we had four full days in Yangon, we decided to take things slow and easy. The city is hot, noisy, busy and dusty and the last thing we wanted to do was exhaust ourselves each day. 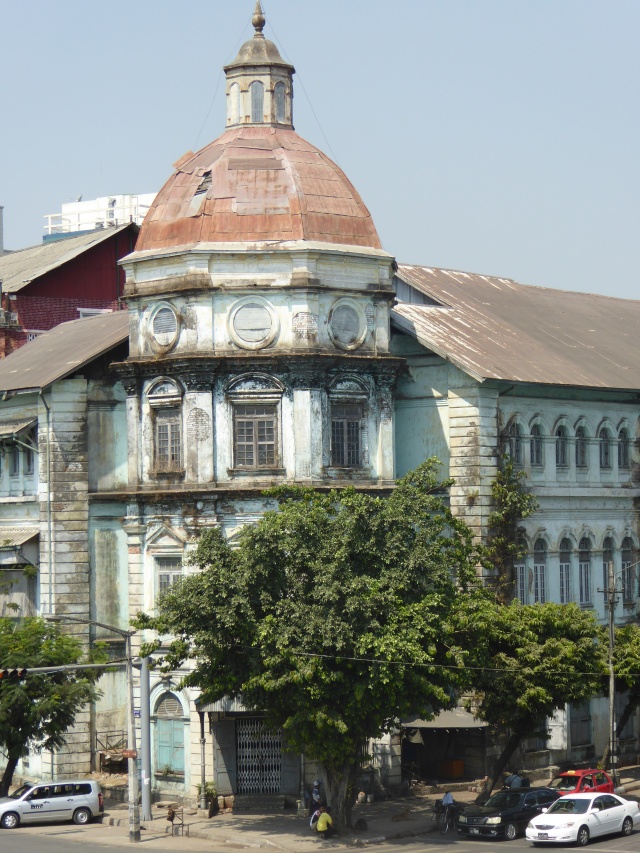 Our first day here we slept in and puttered around the hotel dealing with emails, paying bills and the like on a rare day that the internet was functioning almost like at home. While surfing the internet, we found a great organization called Free Yangon Walks (www.freeyangonwalks.com) that, you guessed it, conducts free walks in downtown Yangon so off we went. Our tour guide, Gino, was from Australia, quite funny, and very knowledgeable. We had a great time on our two hour walk, learning about the history and architecture of Yangon. One of the things that really surprised us is how many of the old, beautiful colonial buildings sit empty today. The building to the right was bombed in WWII.  It hasn’t been repaired; it just stands there empty rotting in the Myanmar heat.  A few of the buildings have been restored, but it sounds like many of them will be torn down soon.  We also learned about a bar with two for one happy hour specials (thank you Gino), so you can guess where we went after the walk….in our defense, we really needed some air conditioning by that time. 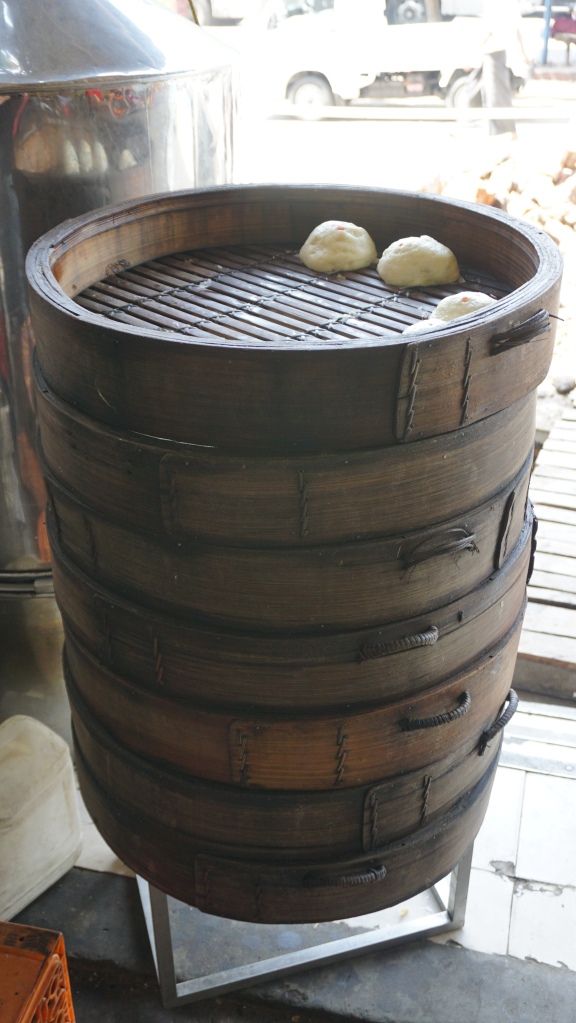 Dumplings waiting to be sold.

On our second day, we had splurged and booked a food tour through Yangon Food Tours. (yangonfoodtours.wordpress.com). It was amazing and worth every penny. The tour was led by a local named James, who spoke good English and was quite personable (and, if he is reading this, he should feel free to correct any of my descriptions of the food – I’m sure I didn’t get everything 100% right). We ate and ate and ate. Our first stop was for shan noodles and stuffed buns. The noodles are some sort of sticky noodles, chicken, tomato, green onion, and who knows what else. The buns came in three flavors: chicken, pork and bean. They were kind of like Chinese buns but not quite the same. We were in heaven and it only got better from there. Next stop was for something called samosa salad. We pulled up the tiny little plastic chairs you only find in Asia (or in your local kindergarten) and watched while the vendor sliced cabbage, mint, potato cooked in turmeric, tomato, samosa, and some sort of fried chick pea fritter like thing, and then threw in a handful of fried chickpeas. It comes in two versions, wet with a bean soup broth or dry. OK, this was even better than the shan noodles. We nearly devoured the samosa salads, but knowing we had three more stops got us to put our spoons down.

Next stop was mohinga. This is considered by many to be Myanmar’s national dish, and is usually served for breakfast. We got lucky, as James’ preferred vendor still had some available when we arrived. This is basically a fish soup with noodles and I was sure I was going to hate it. Wrong. It was, like everything else James introduced us to, amazing. Especially the crispy chickpeas they put in the soup to add some crunch. And, we still weren’t done. Next stop was a vermicelli dish with chicken and fried garlic. Broth was served on the side (but you drink the broth, you don’t put it on the noodles). Another winner. By this time we were stuffed and dessert was still to come. Although, I have to say, dessert in Myanmar is unlike dessert in the U.S.

Really, this is dessert?  Where is the chocolate?

We had a variety of items, including some sort of pancake with green onions (how can anything with onions be considered dessert?), sticky rice with chickpeas, bananas in coconut milk, tapioca jelly like things and palm sugar jelly like things. Good, but I’m not going to be racing back for any of these dessert items anytime soon. On the other hand, Robert is already talking about when we can go back and have more of the samosa salad.

Waiting for the train

The third day we took the circle line around town. The circle line is a train that goes in a circle through Yangon and out into the countryside around Yangon. Currently priced at a break-the-bank price of 50 cents per person, completing the circle takes three hours. The train is a rickety old thing that clatters along the tracks. There is a hard bench on each side to sit on and people hanging out the doors and windows. It stops very briefly at each stop and we frequently saw people getting on or off while the train was underway again. The train itself is filled with people selling snacks. We saw vendors selling sliced watermelon, boiled eggs, roasted peanuts, apples, oranges, and a variety of things we couldn’t identify. 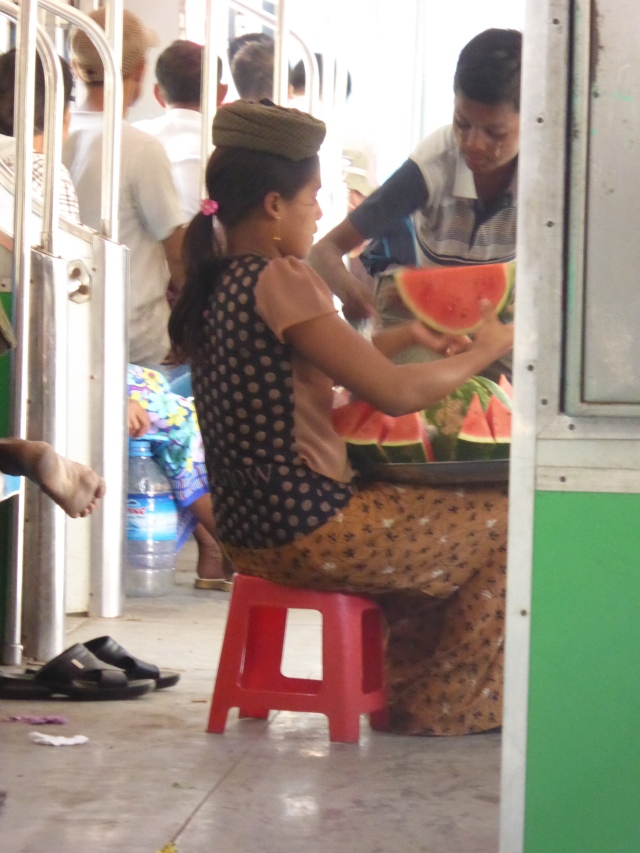 The highlight for us, however, was about half way round when we hit a market. People piled on with bags and bags and bags of fruits and vegetables. In many cases, the bags were huge (think of a sack filled with something like 50 cantaloupe). Best we can tell, they were buying them wholesale and then taking them into the city to sell. The family across from us spent the entire trip rearranging and freshening up stalks of some green leafy vegetables then rapidly packing everything back up when they got to their stop. Unfortunately, nobody got on with any live animals – I was really hoping for some chickens.

Later that night we went to 19th street for BBQ. The entire street is filled with small little restaurants. Each has a case out front filled with skewers of meats, seafood and veggies. You pick out what you want, put it in a basket, hand it to the host, and drink some Myanmar beer while it is BBQ’d up for you. We had some sort of fish that was amazing, pork ribs, some sort of dried pork (kind of like BBQ’d pancetta), chicken wrapped around tiny little mushrooms, squid, and broccoli. It was a feast and probably our best meal in Myanmar! 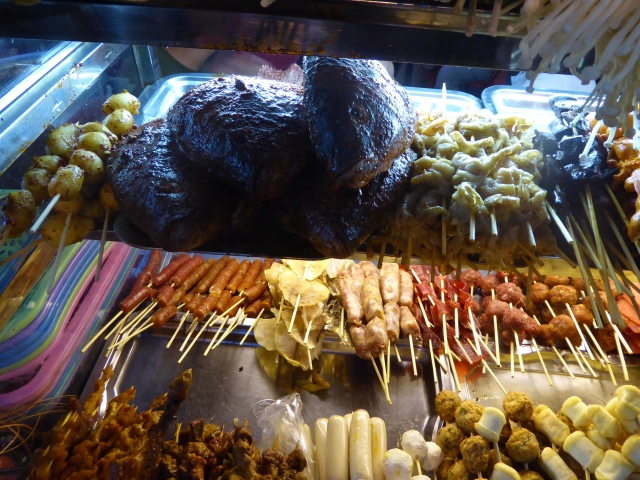 Our final day was a lazy one, as neither of us was feeling 100%.  But we did make it out for a second round of samosa salad, which we learned cost a mere 50 cents a bowl.  Robert is already talking about learning how to make it post-PigFish.  Tomorrow we are off to Cambodia.

Lisa has a degree in biology and another in law and has spent the last 20 years working as a patent litigator. She is a voracious reader of young adult dystopian fiction and watches far too much bad tv. She loves pretty much anything to do with zombies, and doesn’t think there is anything weird about setting an alarm at 6 am on a weekend to stumble to a pub to watch her beloved Chelsea boys. Robert has had many professions, including a chef, a salesman, an IT guy and most recently, a stay at home dog dad. He speaks Italian and hopes to learn Spanish on this trip. He loves nothing more than a day spent sailing, hopes to do more scuba diving, and rues the day he introduced Lisa to football (i.e., soccer).
View all posts by theschneiduks →
This entry was posted in Myanmar and tagged food tour. Bookmark the permalink.